Ernst Cassirer, the Enlightenment, and the struggle against fascism. Marking Ernst Cassirer’s birthday on 28 July

Ernst Cassirer (1874-1945) has a curious place in Enlightenment studies. Probably best known today as a Neo-Kantian, Cassirer produced major work across a wide range of subjects. His 1929 confrontation with Martin Heidegger at Davos became iconic in the history of European philosophy, although most observers agreed that Cassirer – and, by extension, his vision of rational moral autonomy – came out worse. The following years seemed to confirm this defeat: democratic liberalism humiliated by the (future) court philosopher of National Socialism. After 1945, Cassirer was, far from being vindicated, seen as hopelessly naïve. He didn’t fall entirely out of favour – his work appears to have influenced Hannah Arendt – and most commentators remained sympathetic to his moral clarity. This moralism was, however, largely dismissed as insufficient against the demands of the twentieth century.

Since the end of the Cold War Cassirer has been taken much more seriously. Oswald Schwemmer, Barbara Naumann, Ursula Renz, Michael Friedman, Peter E. Gordon, and Edward Skidelsky, among others, have revived interest in Cassirer. Much of this work has focused on his theory of culture, but he has also been taken up by philosophers of science as having prefigured structural realism. If it’s fair to say that Cassirer’s importance has been restored, The Philosophy of the Enlightenment (1932) remains neglected. While it is credited with sparking renewed scholarly interest in the Enlightenment, it is also often seen as insufficiently attuned to contemporary politics, too optimistic regarding the intellectual value of the Enlightenment, and narrow in its range of subjects and protagonists. These claims are not entirely unfounded, but I would like to suggest that Cassirer’s work on the Enlightenment is far richer than is often appreciated. 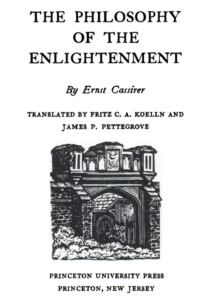 The Philosophy of the Enlightenment is, by design, a relatively short book. The main text of the English translation comes in at 360 pages which, though not insubstantial, is certainly brief as a single-volume study of European ideas from Hobbes to Kant. Part of a series titled Outline of the Philosophical Sciences (Grundriß der philosophischen Wissenschaften), the book was written as an introduction to key philosophical ideas. Cassirer’s preface acknowledges that, given this format, it would be inappropriate to attempt a comprehensive account of the Enlightenment. He admits the decision to sacrifice contextual detail in favour of an intensive study of key themes in order to equip readers with a reasonable grasp of what he considered the most important eighteenth-century ideas. Modern intellectual historians rightly argue that contextual detail is crucial to understanding philosophical output. However, we should keep in mind both that the book appeared decades prior to the rise of modern contextualism and that the lack of contextual detail was not simply an oversight but a decision guided by the aims of a broader project.

With that being said, Cassirer does make some important omissions. Most obvious is the near-total lack of women. No modern account of the Enlightenment would hope to get away without at least a nod to Mary Wollstonecraft. The better ones will consider at least some of the many other women who made important contributions, such as Émilie du Châtelet, Laura Bassi, Catharine Macaulay, and Olympe de Gouges. In Cassirer’s work, du Châtelet appears, but only as the passive receiver of Voltaire’s Essai sur les moeurs. A footnote lists Catherine II as editor of a Traité de la Tolérance by Diderot, although this is almost certainly a misattribution.[1] Two salonnières receive passing mention (page 355). That’s it. Feminine personifications of truth, nature, and other abstract concepts receive far more attention than do actual women. Similarly absent are Black Enlightenment intellectuals such as Anton Wilhelm Amo, Ottobah Cugoano, Ignatius Sancho, and Olaudah Equiano, although this remains unfortunately typical of many modern accounts. Indeed, Cassirer gives no consideration to the Enlightenment’s role in the development of modern racism. Again, however, this remains unfortunately common. Even given these limitations, there are still some curious absences, perhaps most notably Adam Smith and Johann Joachim Winckelmann.

At the same time, Cassirer’s work does pack a lot into its 360 pages. I’ve encountered a startling number of assertions that The Philosophy of the Enlightenment can be summarized as ‘the philosophes, plus Kant.’ On one occasion I was told that Cassirer makes no mention of either David Hume or Christian Wolff. This had me baffled, because both certainly do appear (and at quite some depth). France, Britain, and the German lands all receive reasonably broad treatment. For decades following its 1951 appearance in English, Cassirer’s work included far more on the German Enlightenment than other Anglophone accounts. It could give some twenty-first-century studies a run for their money. Alongside familiar names – Kant, Wolff, Leibniz, Lessing, and Mendelssohn – Cassirer offers accessible introductions to other key Aufklärer such as Johann Christoph Gottsched, Alexander Baumgarten, and Johannes Nikolaus Tetens. Readers also meet a number of Dutchmen – not just Spinoza but Willem ‘s-Gravesande and Pieter van Musschenbroek – and lesser-known Swiss (Johann Jakob Breitinger and Jean-Pierre de Crousaz). We would now expect more on Southern, Eastern, and Nordic Europe but, again, we should keep in mind the book’s interwar origins. Italy only became a key area in Enlightenment scholarship following the work of Franco Venturi, and many other regions remain underrepresented today. Overall, modern students – and especially those less familiar with Germany – will still gain something from Cassirer’s book.

Another common criticism is that Cassirer limits himself to philosophy. It is tempting to respond by simply pointing to the book’s title. However, Cassirer initially hoped to give the book the more general title of History of Ideas of the Age of Enlightenment (snappier in German: Ideengeschichte der Aufklärungszeit) and the preface refers to The Philosophy of the Enlightenment as a ‘phenomenology of the philosophic spirit’ taking in the Enlightenment’s ‘philosophical’ underpinnings, encompassing ‘science, history, jurisprudence, and politics.’ The title doesn’t just refer to philosophy proper, but rather the Enlightenment’s guiding intellectual principles more generally. Thus, if the The Philosophy of the Enlightenment only addresses a narrow conception of philosophy then it would clearly represent a failing according to Cassirer’s own terms. This is fortunately not the case. As well as key topics within philosophy, Cassirer dedicates chapters to the natural sciences, history-writing, theology, and legal and political thought. There is of course plenty more that he could have included – perhaps most obviously anthropology – but, again, Cassirer covers a good deal of ground given the book’s brevity.

Cassirer does claim that ‘the philosophy of the Enlightenment…[is] dominated by a few great fundamental ideas expressed with strict consistency and in exact arrangement’ and shortly after asserts that it culminated in – and was effectively superseded by – Kant’s Critical Philosophy. Both of these interpretations are now hopelessly outdated. They tell us far more about early twentieth-century historiography than about the eighteenth century itself. Nevertheless, Cassirer’s emphasis on the assertion of reason as the Enlightenment’s leitmotif is not just a matter of abstract principles. He continually reminds the reader that what differentiated the Enlightenment’s rationality from that of earlier philosophical eras was the expectation that the conclusions drawn would lead to practical improvements for humanity in the world at large. While much of Cassirer’s historiographical scaffolding is problematic, then, his central conclusion is not too distant from John Robertson’s influential view that ‘the intellectual coherence of the Enlightenment may…be found…in the commitment to understanding, and hence to advancing, the causes and conditions of human betterment in this world.’ 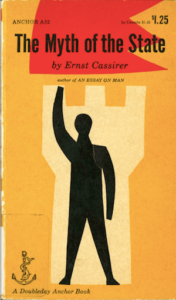 Moreover, Cassirer’s arguments are best understood in relation to his own political context. The Philosophy of the Enlightenment was written against the backdrop of the rise of fascism. The preface is signed October 1932, three months after the Nazis had become the largest party in the Reichstag. Hitler was appointed Chancellor the following January. Cassirer – liberal and Jewish – soon fled Germany. Since the 1927 publication of Heidegger’s Being and Time Cassirer had become increasingly concerned about contemporary European philosophy’s tendency to deny the possibility of rational agency. This was typified by Heidegger’s concept of ‘thrownness,’ which Cassirer argued was a surrender of agency to the contingency of historical circumstance. This surrender, intentionally or otherwise, encouraged irrationalism and thereby facilitated fascist notions of race, national glory, and pseudo-heroic violence. He developed this analysis most fully in The Myth of the State (1946), tracing the development of this tendency through Oswald Spengler, Arthur de Gobineau, Thomas Carlyle, Hegel, and others. The Philosophy of the Enlightenment, prepared following his debate with Heidegger, presented an alternative understanding of philosophy and human agency that, Cassirer hoped, might help to counter the prevailing currents of contemporary Europe. We might also see Cassirer’s prioritization of what he saw as valuable ideas – rather than contextual analysis – in light of this sense of urgency.

Ernst Cassirer died suddenly on 13 April 1945, mere weeks before the end of the war. Had he lived he might have further refined his interpretation of modern European philosophy. Despite its imperfections and omissions, however, The Philosophy of the Enlightenment remains a lively and engaging introduction to a wide range of ideas and debates. Especially when read alongside more context-oriented accounts, there are certainly worse places to begin with the subject. This is particularly true for those interested in German ideas. Whatever else we make of it, moreover, Cassirer’s Enlightenment represented a principled opposition to national chauvinism and an attempt to offer an alternative vision for humanity.

[1] It’s not clear which text is referred to here but it’s extremely unlikely to have been edited by Catherine. Thanks to Shiru Lim for alerting me to this fact.

One thought on “Ernst Cassirer, the Enlightenment, and the struggle against fascism. Marking Ernst Cassirer’s birthday on 28 July”