From the Mundane to the Philosophical: Topic-Modeling Voltaire and Rousseau’s correspondence

Voltaire and Rousseau’s correspondence are two fascinating collections which have perhaps not gotten the amount of attention than they could have due to the nature of these texts. Written over five decades, these letters cover a wide range of topics, from the mundanity of everyday concerns to more elaborate subjects, getting an overall picture of these correspondences is challenging for the simple reader. This is unfortunate since these correspondences not only constitute a window into the private lives of Voltaire and Rousseau, or show an unfiltered expression of their respective thoughts, but because they are an example of the eclecticism professed by the philosophes. Fortunately, modern computational techniques can truly help in providing an overview of the content of these letters and hopefully recapture — in a somewhat organized fashion — this very eclecticism of the Lumières. Thanks to the collaboration between the Voltaire Foundation and the ARTFL Project, I will be briefly discussing how topic-modeling can be used to draw an overall picture of these correspondences, and show a couple of examples of the model built from the Voltaire letters.

The ARTFL Project has long been engaged in exploring 18th century discourses using digital tools, and the thematic opacity of correspondences is an ideal use-case for topic-modeling. This particular algorithm was designed to generate clusters of closely related words (or topics) by analyzing all word co-occurrences in any given corpus. Because these topics are extracted from their source texts, they are understood to describe the contents of the corpus analyzed. We recently released a topic-modeling browser — called TopoLogic — which was designed to explore such clusters of co-occurring words, and ran a preliminary experiment against the French Revolutionary Collection, the results of which can be seen here. When we built the topic models for Voltaire and Rousseau’s correspondences, we made sure to use the same parameters for both collections such that 40 topics (or discourses) were generated from each set of letters. We also only used those letters written by Voltaire on one side, and Rousseau on the other, hoping that we could perhaps make some comparisons between both models.

Let’s start with the Voltaire model, from which you can see the first 20 topics below: 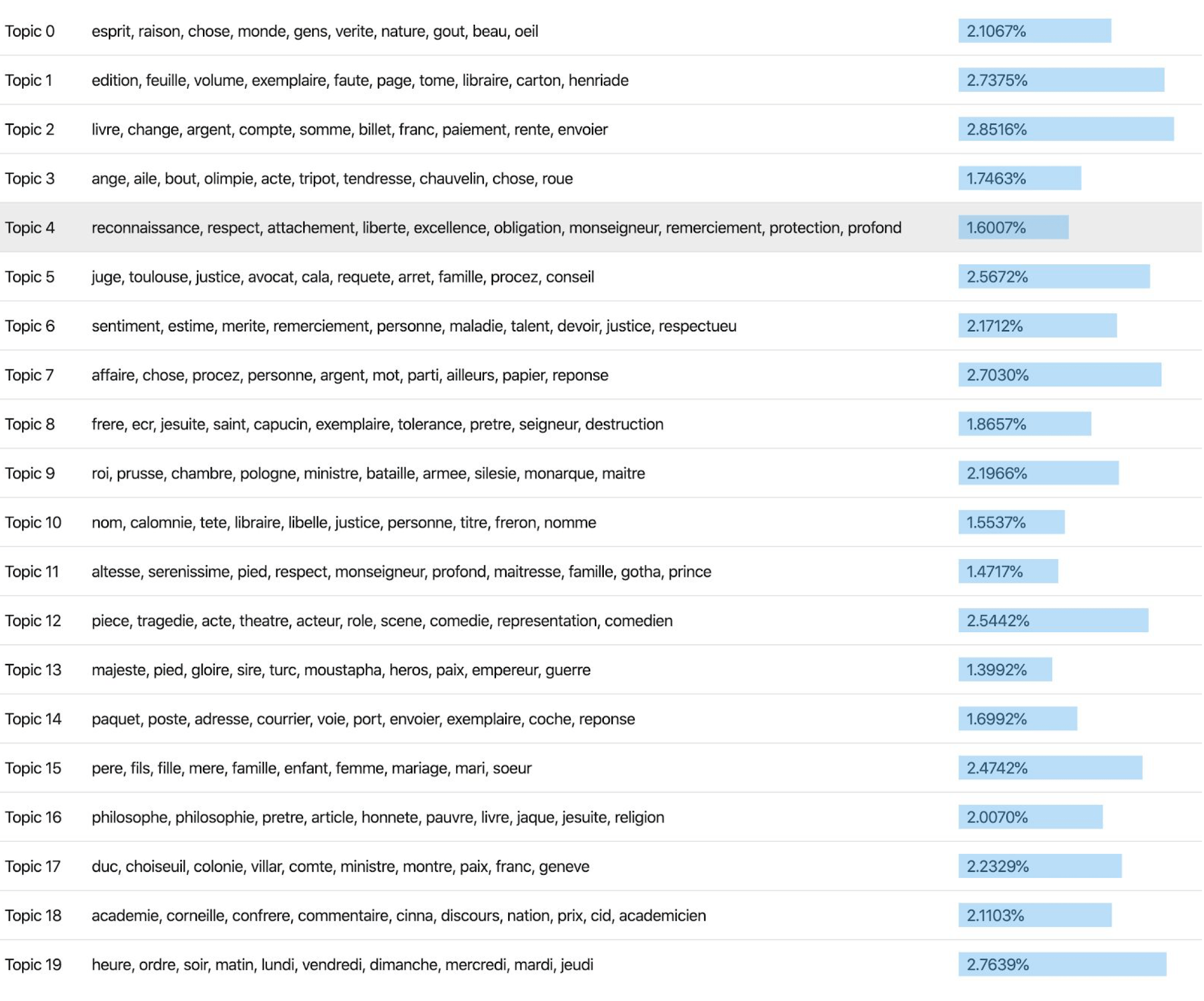 As a first view into the topic model, the browser gives us the top 10 words for each topic, as well as their overall prevalence in the letters by Voltaire. From there we can further explore any topic, such as 16, which seems to map to Voltaire’s idea of the philosophe fighting against religious intolerance. By clicking on the topic however (see left side of figure below), we note that the terms of philosophe and philosophie are weighted far more heavily than any other term, suggesting perhaps that all other words in this cluster may just constitute different characteristics of the philosophe in Voltaire’s eyes: religious concerns (pretre , jesuite , religion, tolerance , attributes (honnete, sage), means of expression (article, livre). 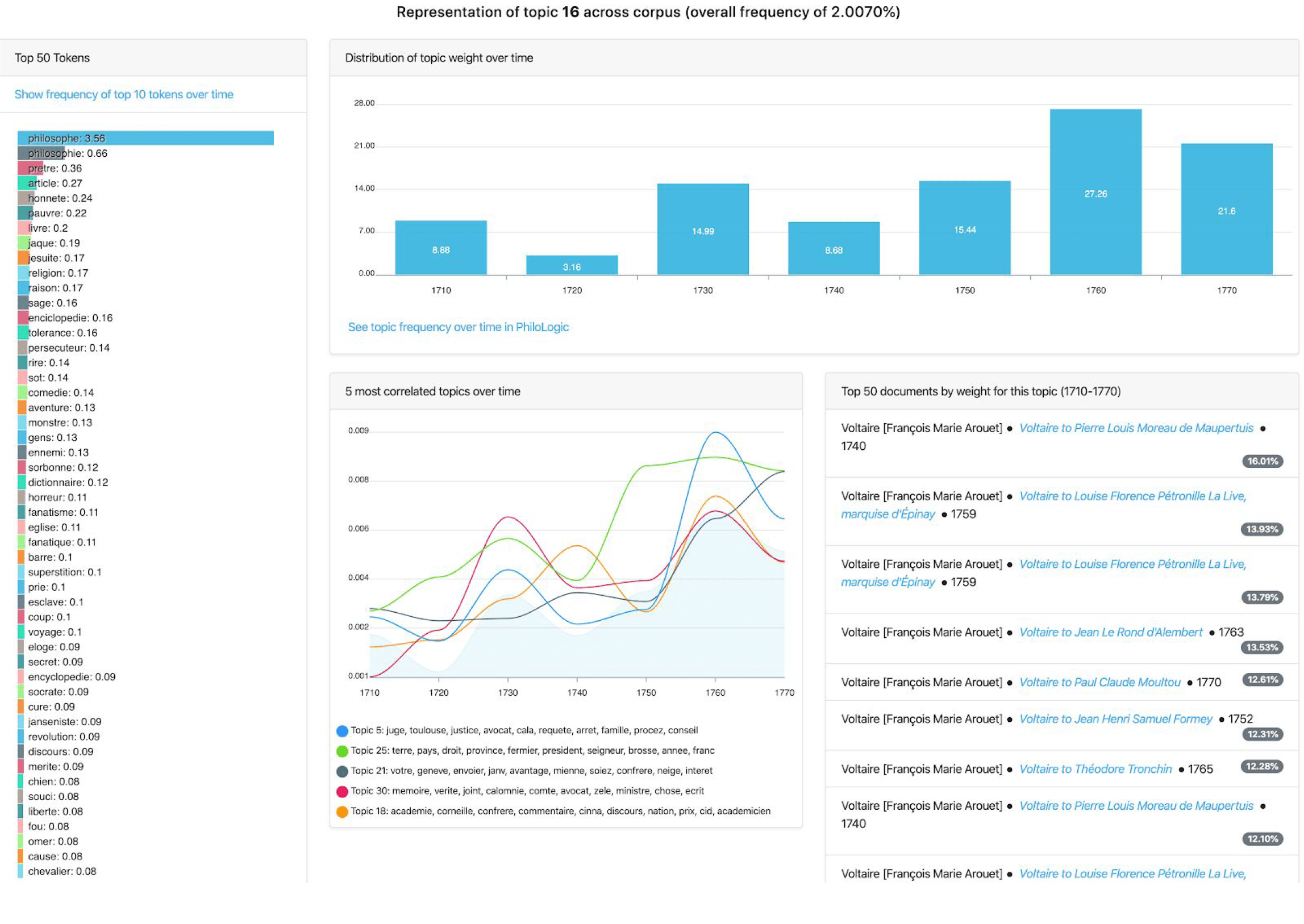 All of these observations can of course be verified by exploring letters that feature topic 16 in a prominent way, which the browser does list. We can also see how the philosophe discourse evolves over the more than sixty years of Voltaire’s letters. Unsurprisingly, as his public involvement in religious affairs increases, the prevalence of such terms discussing his idea of the philosophe rises as well in his letters. Among the discourses which tend to follow the same trend over time (in most correlated topics box), the cluster of terms related to justice (topic 5) stands out, once again showing that his public involvement is mirrored in his private correspondence. While these aspects are nothing really new, they provide for the prospective reader an easy way to find those letters that do discuss these topics.

Another interesting aspect of topic-modeling is that we can also examine the discursive make-up of any of Voltaire’s letters, and see if there are any other letters that share the same themes. Let’s examine Voltaire’s famous letter to Rousseau in which he mocks the citoyen de Geneve ‘s position on the impact of literature in the second discourse (see figure below): “Les Lettres nourissent l’âme, la rectifient, la consolent”. 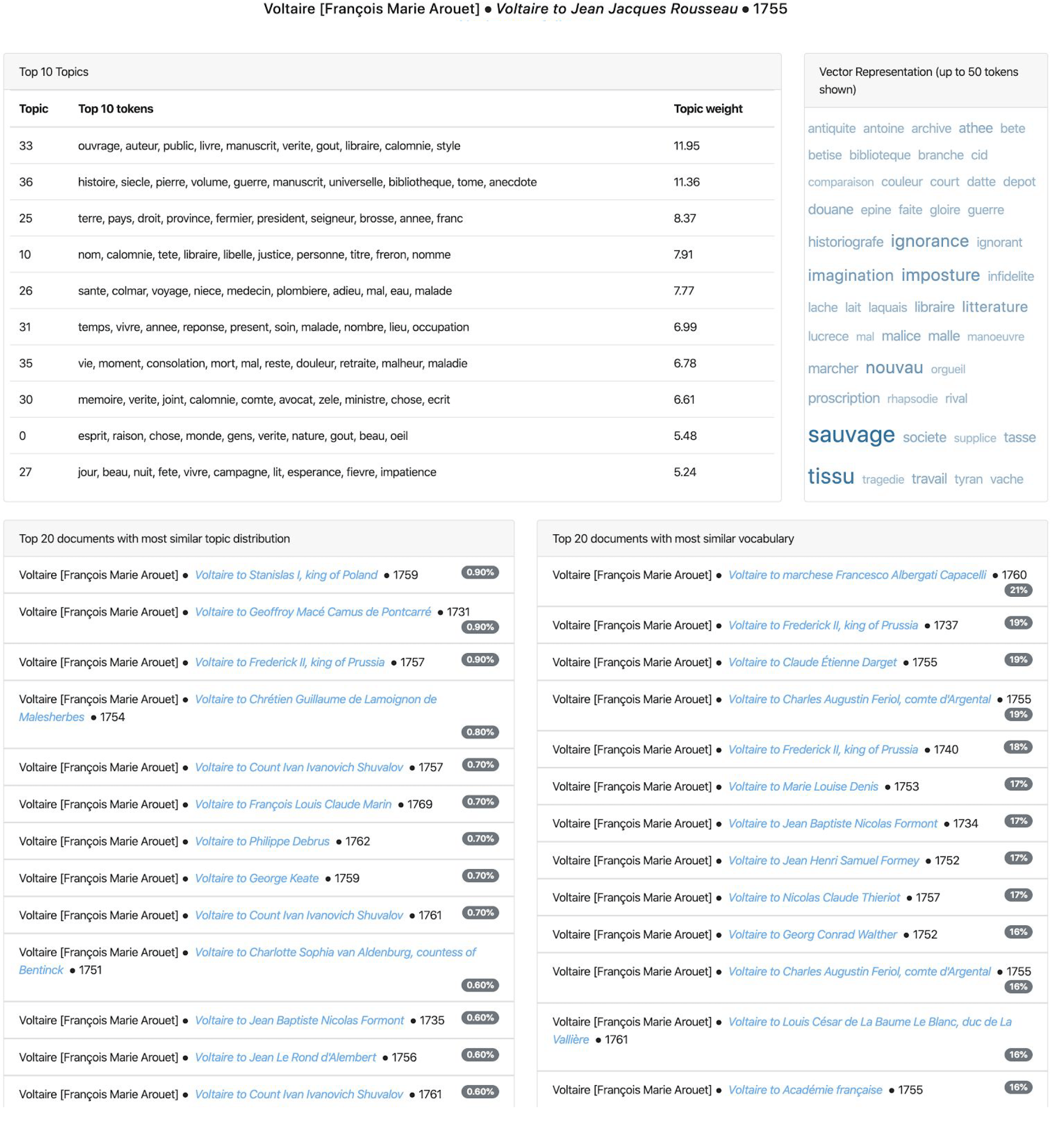 When we look at topical representation of this letter in the browser, we can note that the model found a number of different topics within this letter, which when combined do provide an overview of its contents. In it, Voltaire discusses — with much irony — his own experience as a writer (topic 33), which includes his role as historiographe du roi (topic 36), as well as the many controversies he was involved in (topic 10). He sarcastically laments the fact that he cannot afford to live with savages in a distant land (topic 25) because his health requires him to be treated by a doctor (topic 26 and 35).  And as a whole, he defends the role of literature as a positive good for man (topic 0). Of course, one could argue that this topical structure is approximate, prone to discussion, and this is certainly true. However, this approximation is now available for all 15,000 letters, which then allows the computer to compare and group letters by this very topical structure. In this same document view, we can see documents which share a similar mixture of topics, such as a letter to Ivan Shuvalov from 1757 where Voltaire discusses his writing of history while displaying a very keen concern for the perception and impact of his writing, or another to d’Alembert where he complains about his bad health while stressing the importance of writing about useful things (“il y avait cent choses utiles à dire qu’on n’a point dittes encore”).

One last aspect of the topic model is to examine the individual uses of words and the different contexts in which they are used. If we look at the uses of ecrivain in the correspondences (see figure below), we can see how that its uses span across different types of discourses related to reason, the writing of history, or the public role of the writer. Looking at the actual word associations, we also note potentially interesting patterns. In the case of words that share similar topic distributions (used with a similar mix of discourses), a group of terms related to ignorance seems to dominate: faussete, mensonge, ignorance, verite, erreur, fable… This may allude to a sense of mission in Voltaire’s writings: to correct inaccuracies, to dispel lies, to reestablish the truth in the face of ignorance. Looking this time at words that tend to co-occur with ecrivain, we get a very different picture, with terms that relate more to the activity of writing and the product of that writing. Both of these views on word associations do not contradict one another, but suggest different ways of thinking of the role of the ecrivain as depicted in Voltaire’s letters. 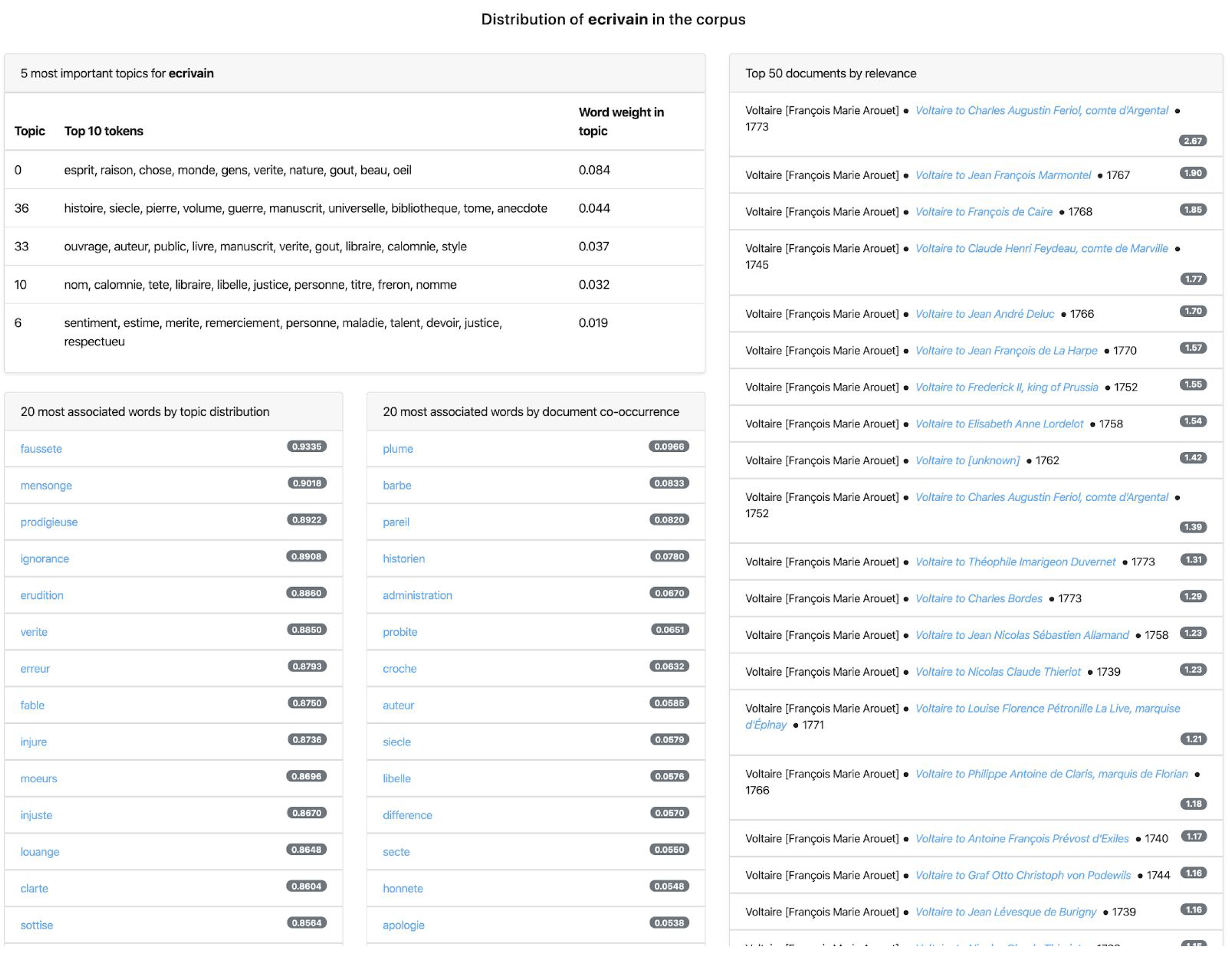 To finish, let’s take a look at the topic model of Rousseau’s correspondence, and in particular how we can relate it to that of Voltaire. A quick overview of the first 20 topics in Rousseau’s letters reveals a similar — yet distinct — picture of the topical composition of his correspondence (see figure below). 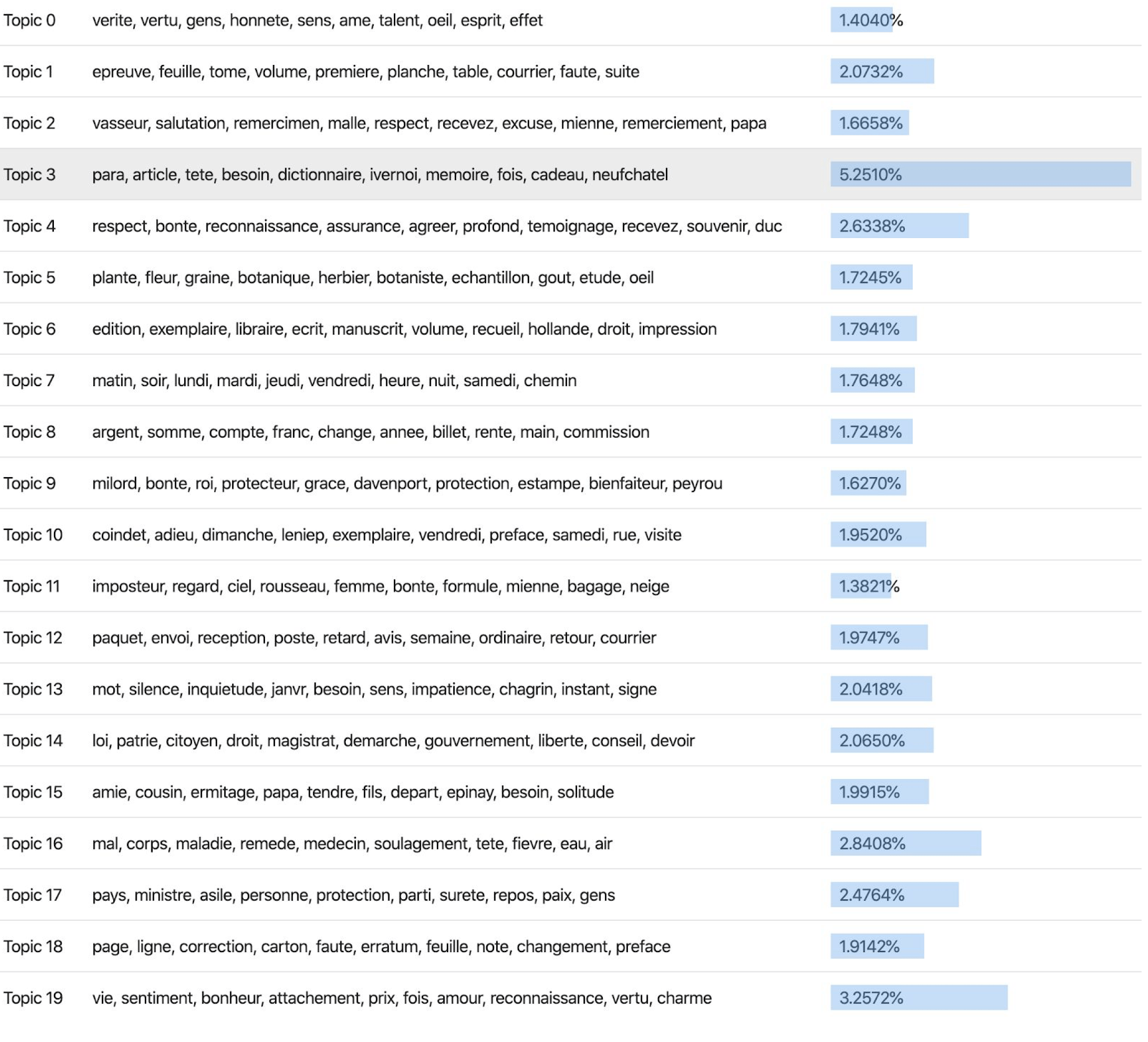 Using the browser, we could track down Rousseau’s response to Voltaire’s criticism of the second discourse, and see if other letters discuss similar themes. This is all within the scope of this browser. For the sake of brevity however, and to show how topic models can be used to run comparative experiments, we wanted to focus on Rousseau’s usage of the word ecrivain in order to see if and how it differed from what was suggested in the Voltaire model. As we can see below, Rousseau tends to use the term in similar contexts: the ecrivain is invoked first and foremost as a conveyor of truth. But looking more closely at word associations, a distinctive pattern does emerge: such terms as lache, haine, hypocrite, acharnement, or jalousie highlight a well-known trait of Rousseau, his paranoia in the face of his success as a writer. Clicking on any these words in the browser would allow a researcher to track down the individual uses of these terms as they relate to ecrivain, and find those letters to discuss his persecution complex. 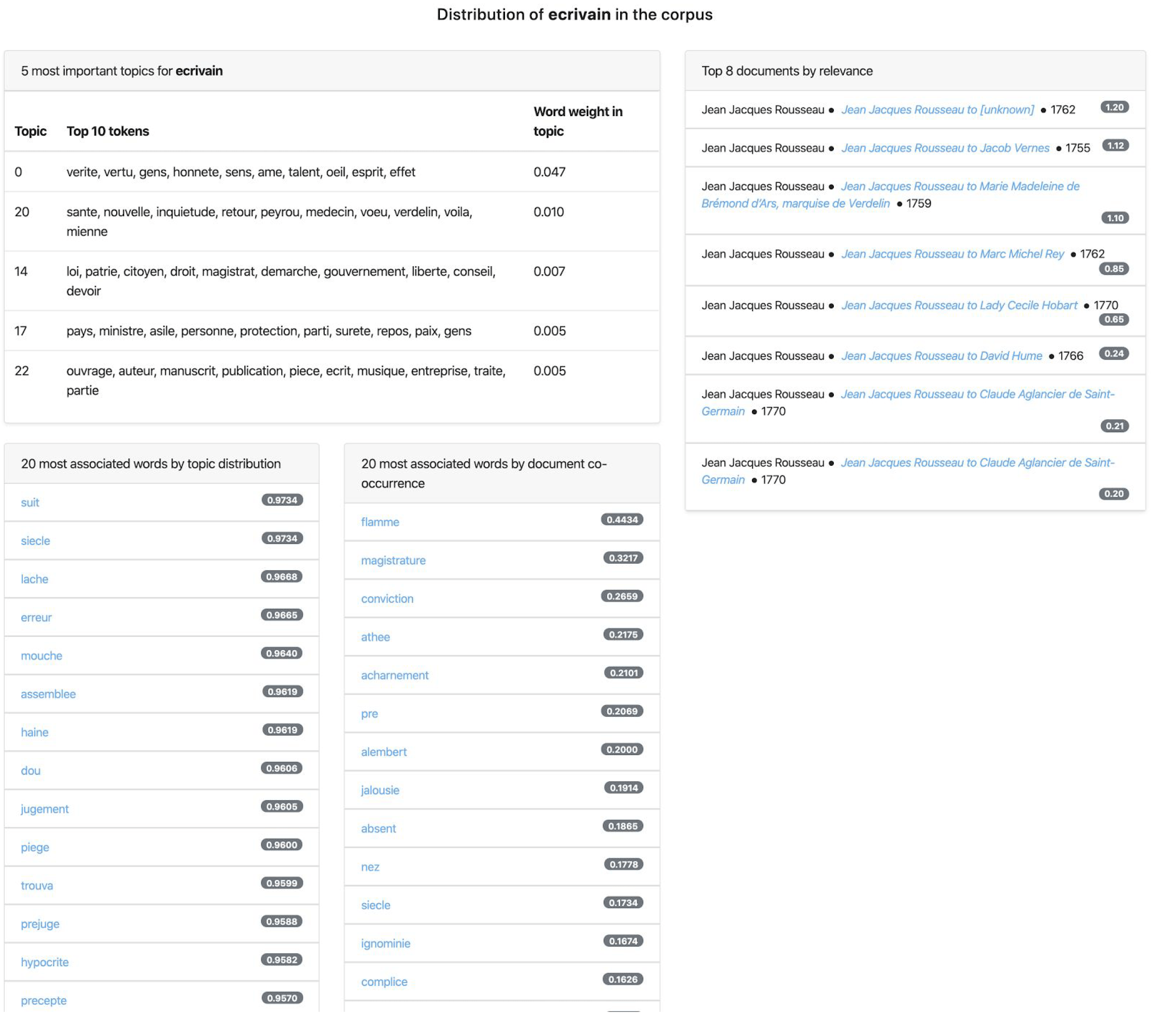 To conclude, we are well aware that any analysis provided here is purely built on the patterns derived from the topic models, and as such, remain unproven until verified by a close reading of the letters themselves. However, we hope to have shown how using a tool such as topic modeling can potentially provide new insights into the correspondences of Voltaire and Rousseau, or at the very least offer better guidance to scholars working on these two incredibly rich collections.