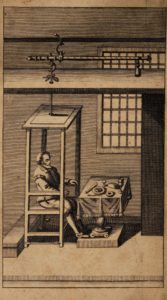 “Having provided my self with this [Sanctorian] Chair, I used to Study, Eat, Drink, and Sleep in it; insomuch that I may be said, for these three last Years, to have lived in a Pair of Scales. I compute my self, when I am in full Health, to be precisely Two Hundred Weight, falling short of it about a Pound after a Day’s Fast, and exceeding it as much after a very full Meal; so that it is my continual Employment, to trim the Balance between these two Volatile Pounds in my Constitution. […] I do not dine and sup by the Clock, but by my Chair, for when that informs me my Pound of Food is exhausted I conclude my self to be hungry, and lay in another with all Diligence” (The Spectator, no. 25, 29 March 1711, ed. Smeed, Oxford 1965, vol 1: 106).

Here is an anonymous correspondent of Joseph Addison and Richard Steele’s famous Spectator (1711–12, 1714) describing his latest approach towards establishing and preserving his health in early eighteenth-century London. It is hard to overlook the topicality of the passage for current discussions of individual and public health. Just think of the methods now popular in the Quantified Self community, who gather “self-knowledge through numbers” with the help of their smartphones or computers (https://quantifiedself.com/about/what-is-quantified-self/), essentially aiming at self-optimization through changes of habits, emotions, and perspective.

Of course, the Spectator’s contribution to the topic does not form part of a self-tracking movement avant la lettre, but represents an excellent example of the authors’ project of reforming British society along the lines of (Whig) morality, based on benevolence and politeness, with the help of daily (later thrice weekly) satirical comments on the contemporary arts, fashions, and manners. The above-cited letter presents the reader with a character sketch, a snapshot of a type of man which exposes his habits and preferences, marked as typical of the day. Even more than the numerous other character sketches published in the Spectator, this one approaches its object systematically, showing the correspondent keen on providing Mr Spectator with a full record of his case.

“Sir,” the correspondent begins his letter, “I am one of that sickly Tribe who are commonly known by the Name of Valetudinarians, and do confess to you, that I first contracted this ill Habit of Body, or rather of Mind, by the Study of Physick” (The Spectator, vol 1: 105). In the very first sentence of the letter, he isolates the gist of his problem: he is a Valetudinarian, that is, a physically frail person who constantly worries about his health. Firmly settling his account in the medical sphere, he addresses Mr Spectator as physician, the periodical emerging as a collection of (medico-moral) case studies. More particularly, the diagnosis that opens his letter appears to be the result of extensive observation and self-reflexive analysis. And, indeed, what follows is a methodical record of the development of his problem: He provides Mr Spectator (and the reader) with the case history that mirrors distinctly modern empirical practices that Lorraine Daston has identified as attentive and repeated observation, note taking and synthesis (Histories of Scientific Observation, Chicago 2011, chap. 3). 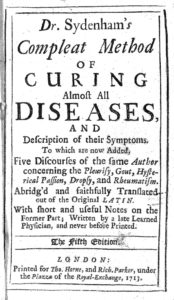 The two parts of his account receive specific functions, each dedicated to one particular means of (self-)cure: 1. the medical treatise, and 2. the Sanctorian Chair. The first section recounts the correspondent’s way through a fever, consumption, the gout, the stone and, finally, “a Complication of Distempers” (The Spectator, vol 1: 105), all contracted, he claims, by reading such medical works as Thomas Sydenham’s widely popular A Compleat Method of Curing Almost All Diseases (London 1694): “I no sooner began to peruse Books of this Nature [i.e. medical treatises], but I found my Pulse was irregular, and scarce ever read the Account of any Disease that I did not fancy my self afflicted with” (ibid.). Maintaining a strikingly consistent analytical distance from his own case, the Valetudinarian points to the likely cause of his distemper: his somewhat overly active imagination, and the intrinsic connection of body and mind. The account drives towards a climax, namely, the correspondent’s discovery of Sanctorius’ Medicina Statica: or, Rules of Health, in eight Sections of Aphorisms (English translation by John Davis, London 1676), in which Sanctorius introduced his weighing chair, “a research tool to monitor variations in the production of perspiratio insensibilis” and an instrument “to determine and maintain an ideal body weight” (T. Hollerbach, “The Weighing Chair of Sanctorius Sanctorius: A Replica,” NTM 26 (2018): 121–149, here 143, http://doi.org/10.1007/s00048-018-0193-z). This forms the transition to the second part of his account, in which he turns from reading to experiment. The correspondent details the experimental setup (see initial quote above) and his response to the results his instrument provides. While his daily activities (his enjoyment of “Small Beer,” his “walk[s],” and his times of “Study”) are not unusual for contemporary gentlemen, the setting of his life strongly distinguishes him from the norm. He so fully engages in his experiment and with his instrument that he assumes artificial patterns of consumption: Instead of relying on his instinctive needs (thirst, hunger), he lives by the demands of the scale, reducing the complex balance of numerous factors that we call ‘health’ to the single factor of weight. Recapitulating the success of his efforts, his conclusion serves as the clearest indication of his empirical methods:

“Upon an exact Calculation of what I expended and received the last Year, which I always register in a Book, I find the Medium to be two hundred weight, so that I cannot discover that I am impaired one Ounce in my Health during a whole Twelve-month. And yet, Sir, notwithstanding this my great Care to ballast my self equally every Day, and to keep my Body in its proper Poise, so it is that I find my self in a sick and languishing Condition. My Complexion is grown very sallow, my Pulse low, and my Body Hydropical. Let me therefore beg you, Sir, to consider me as your Patient, and to give me more certain Rules to walk by than those I have already observed, […]” (The Spectator, vol 1: 107).

By tracking his weight (changes) over the period of one year and by recording such minute details as ounces, the correspondent follows the requirements of repeated and attentive, that is, sustained (self-)observation. He makes notes of his observations in a book that, in turn, allow him to form an average. The “Medium” he refers to represents the synthesis of the data, which he has collected throughout the observation interval. Thus, his argument relies on well-grounded evidence, the written records of his own observations, which are designed to sustain his authority. However, his efforts prove to be futile. Unable to effectively cure himself, he turns to Mr Spectator for help.

As may be expected, Mr Spectator’s response to the letter stresses the significance of common sense and of a change of focus: Rather than concentrating on his own body and its “Preservation,” an action that seriously interferes with divine Providence, the correspondent should be concerned with the “Direction” of his life (The Spectator, vol. 1: 108) and the improvement of his mind, which is essentially assisted by adequate reading. It is not in medical works, but in moralistic writing – Æsop’s fable of “Jupiter and a farmer” that Mr Spectator explicitly refers to and, by implication, The Spectator itself – that the correspondent finds moral edification and the advice promoting a good life in society, not an isolated being in his chair.

Of course, the issue exposes the Valetudinarian to the readers’ ridicule. Yet, concluding that the authors just sweepingly condemn his approach would be to simplify the process. It is primarily his obsessive and exclusive preoccupation with his own body, which apparently leaves no space for social concerns, that the persona criticises and that links the Valetudinarian with contemporary naturalists who were equally censured for prioritising their research over their social duties (see Daston). The observational methods that he uses, however, are exempt from Addison and Steele’s disapproval, essentially, because these practices define the periodical’s characterological methods themselves. The many character sketches printed in the Spectator reflect a strong empiricist stance and collectively represent a near systematic approach to character writing. Contributed by the persona Mr Spectator, the Spectator Club members and, importantly, by the numerous (probably largely fictional) correspondents, the character sketches not only cover a range of different moral types – from the Battle-Critic to the Scholar of Fire, from the Dapper to the Ogler, from the Idol to the Scold – but also repeatedly focus on the same types, thereby exposing different behavioural details each time, which make the types recognisable in (daily) interactions, and hence cooperatively engaging in sustained observation. Mr Spectator and his correspondents explicitly use notetaking as an aide-memoire and as a (preliminary) record of their observations. Largely dealing with concrete representatives of the moral types that people their daily lives, the Spectator’s community of observers more or less explicitly use inductive reasoning, with the texts representing their cognitive process from perception to classification.

So, rather than the observational methods per se, it is the excess and the individualistic nature of the Valetudinarian’s approach that are under attack. His primary concerns are off balance: He acts exclusively for himself and, in the process, loses sight of society and his own needs as a quintessentially social animal. His endeavours do not have a social purpose; they are aimed at creating a healthy self, not a healthy community. The same, one might argue, holds true for the quantified selves of the twenty-first century. Counting steps and calories, constantly keeping track of one’s blood pressure, or surveying one’s sleep, focuses the attention ever more on the individual and the self. While there are certainly public merits in increasing individual health, what is the social use of “liv[ing] longer than any person that has ever lived (122+),” the objective of the self-optimizer Michael Lustgarten (https://michaellustgarten.com/about/)? Instead, self-quantifiers should recollect the true sources of self-optimization: self-reflection and the awareness that investing into the communal well-being may appear to be more strenuous, but is, certainly in the long run, infinitely more rewarding.

Theresa’s doctoral project focused on the impact of modern naturalist observational practices in Joseph Addison and Richard Steele’s periodicals The Tatler (1709–11) and The Spectator (1711–12, 1714). She has just published her dissertation A Cosmography of Man: Character Sketches in The Tatler and The Spectator with De Gruyter. Theresa currently works on a project on deviance in the mid-eighteenth-century British non-canonical novel.

« From the Mundane to the Philosophical: Topic-Modeling Voltaire and Rousseau’s correspondence
Introducing Tout d’Holbach »